ISO is the International Organization for Standardization, based in Geneva Switzerland1. You may have heard of ISO 9000/9001 certification, which covers general quality management systems, but there are many more ISO standards – more than 10,000 total standards available at the time of this writing (September 2013), covering everything from IT systems configuration to milk production to statistical methods.2

A bummer, to me at least, is that the standards are not free, and they are not cheap. Copies of standards in electronic (PDF) or paper form can be purchased from the ISO website (store.iso.org) in Swiss Francs, or from ANSI3 or IEST4 in American Dollars. The 18 page ISO 14644-1 will cost you around $100. Note that the copy is for individual use only, not to be shared. Needless to say, to get yourself a complete set of ISO standards would cost you a pretty penny.

This post deals with ISO standard 14644-1 “Classification of air cleanliness.” There is currently (September 2013) two editions available: the official current standard 1999-05-01 and a draft revision, which “…is a draft circulated for comment and approval. It is therefore subject to change and may not be referred to as an international standard until published as such,” available since December 02, 2010. Note that the 1999 version is 18 pages, and the revision is 37 pages. I’ll discuss the differences at the end of this post.

ISO 14644-1 is part 1 of 10 parts of the “Cleanrooms and associated controlled environments” standard, which includes (current revision after colon)5:

Note the standard’s titles changed somewhat in the revision, and 8-10 don’t exist in the 1999 version.

14644-1:1999 includes a foreword, an introduction, sections on Scope, Definitions, Classification, and Demonstration of compliance, and a bunch of Annexes. Let’s deal with each in turn.

The foreword describes a bit about what ISO is all about and lists the parts of 14644, of which there were only 7 in 1999, and the titles were a bit different. The foreword also notes that Annexes B and C are integral to the standard, but annexes A, D, E, and F are for information only.

Quick description of cleanroom purpose (to control airborne contamination) and scope of 14644-1 (assigns ISO classification levels, prescribes testing method and procedure for determining the concentration of particles). The Introduction also notes classifications are for a particular range of particle sizes only, but indicates there is a protocol for determining cleanliness levels for smaller or larger particles, if that is required by a particular process.

Mostly a repetition of the Introduction, but does state the range of threshold (lower limit) particle sizes is 0.1 µm to 5.0 µm. The standard calls particles smaller than 0.1 µm “ultrafine” particles and larger than 5.0 µm “macroparticles” and states populations of these may be quantified in terms of U descriptions and M descriptors, respectively, which we’ll see again below.

There are 9 ISO classes defined in the standard, as seen here6:

The maximum particles per cubic meter (m3) is calculated for each class number N as:

D is the consider particle size, in µm

If you’re bored and want to recreate this in Excel, you can do it like this:

This section includes a reference to Annex B, which covers the test method (details below), and the statement that the average particle concentrations and the 95% upper confidence limits shall be calculated. The average particle concentration shall not exceed the CN value from the table and if you have at least two samples but not more than nine, you need to verify the 95% upper confidence limit is also not greater than CN.

The test report should include:

a)      the name and address of the testing organization, and the date the test was performed

c)       identification of the cleanroom tested and details on sampling locations

e)      details of the test method used, including identification of the instruments employed with calibration certification

f)       Test results, including measurement data for all sampling locations

Annex A Graphical illustration of the classes of Table 1 (Informative)

Includes a different way of looking at the classifications, but this was removed from the later revision.

Minimum number of sample locations should be derived from the following equation (rounded up to the nearest whole number):

where A is the area of the cleanroom in square meters

Sample locations should then be evenly distributed throughout the cleanroom and positioned at the height of work activity. If only one location is required, a minimum of three samples at that location should be taken.

The sample volume (in liters) per sample location is calculated as:

The cleanroom is deemed to have met the specified air cleanliness classification if the averages of the particle concentrations measured at each of the locations and, when applicable, the 95% upper confidence limit calculated do not exceed the concentration limit.

Average particle concentration at location xi: = (xi,1+xi,2+…+xi,n)/n where xi,n is the nth measurement at location i and n is the total number of samples taken at location i.

Overall mean of the averages: = (xi,1+xi,2+…+xi,m)/m where xi,n is the average at location m and m is the total number of locations

Includes worked examples for calculating all of the above – not going to repeat it here.

This annex deals with cases where your process requirements have criteria for particles smaller than 0.1 µm or larger than 5 µm. It is not terribly interesting, just defining the U descriptor and M descriptor formats and referring to IEST guidance for test methods.

The U descriptor is used for < 0.1 µm (“ultrafine”) particles: U(x; y), where x is the maximum permitted concentration per m3 and y is the size in µm at which the particle counter counts such particles with 50% counting efficiency. IEST-G-CC1002 for test methods.

The M descriptor is used for > 5 µm (“macro”) particles: M(a; b); c, where a is the maximum permitted concentration per m3, b is the equivalent diameter associated with the method for measuring in µm, and c is the specified measurement method. IEST-G-CC1003 for test methods.

Annex F covers sequential sampling, a procedure that evaluates sample results in real-time, to reduce the number of samples required for a passing or failing result.

Sequential sampling is based on upper and lower limit calculations as follows:

Where C is the observed count, and E is the expected count.

By plotting sampling results in real time, you can theoretically get to a Pass or Fail more quickly.

Two additional parts to 14644 are noted:

Shortened from 5 to 2 paragraphs, but essentially the same.

Essentially the same, explicitly calls out the use of discrete-particle airborne counting and sizing instruments now.

Annex A Graphical illustration of the classes of Table 1 has been moved to Annex E in the new version.

Analogous to Annex B from the 1999 revision, but with some important changes: 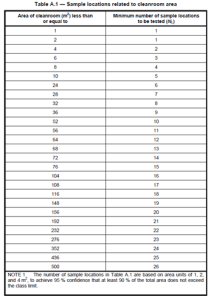 Which, if you compare to the previous, is quite a few more sample locations in some cases:

The number of sample locations in Table A.1 are based on area units of 1, 2, and 4 m2 to achieve 95% confidence that at least 90% of the total area does not exceed the class limit.

Where is the average number of particles at location i

Vt is the adopted single sample volume in liters

Annex B Examples of classification calculation

Contains a lot more examples, almost 8 pages worth, but I guess you’ll have to get your own copy to get access to that.

No signification changes to the previous versions Annex E

This annex has the same basic content, but no includes 2 detailed examples. Email me for details.

This site uses Akismet to reduce spam. Learn how your comment data is processed.